A HOME FOR EVERYBUNNY 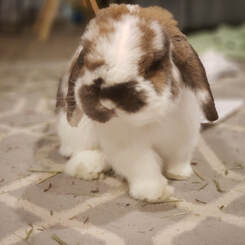 ​Patch came into AHFEB and right away we noticed a problem with his teeth - so his right molars were removed while he was under anesthesia from his neuter surgery - he bounced back quickly and became the best little hay eater! Then a few weeks later, he wasn't himself, and wasn't eating well - the vet found a middle ear infection- which we treated with several rounds of antibiotics of different types, and pain meds. We weren't making progress- in fact we were losing the battle and his ear canal was completely blocked. We drove 2.5 hours to a different vet to get a consult to see if he was a good candidate for an ear canal ablation - which she determined was not necessary and developed an ongoing care plan to keep Patch happy and comfortable, Thanks to many supporters of A Home for Everybunny, far and wide, we raised enough money to provide surgery for Patch should he need it. As this was not the outcome, we have designated some of the funds raised for Patch's ongoing care and placed the remainder in a medical fund for our next bunny in need.

Patchie is the best, sweetest bunny ever - He's been so tolerant of all the poking and prodding he's been through , even the Penicillin shots every other day haven't phased him. After everything he had been through, his foster hoomins decided they couldn't possibly let him go and adopted him! He enjoys snuggling with his hoomins, and never chews on anything he shouldn't. The ear infection has caused some facial nerve paralysis on his left side, but it doesn't seem to bother him at all, it just makes him look like he's squinting on that side. We can only agree with his self- assessment of being the "most adorable bunneh"!
And the cherry on the cake??
Patch recently found himself with a girlfriend! The pretty lady Sapphire, also one of our rescues, hopped to his home as a foster and they quickly bonded and now live hoppily ever after, together furever.
Follow along with Patch on his Instagram!